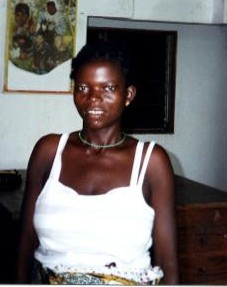 The Society estimates that there are 8,000 girl-slaves — slaves in the fullest sense of the term — in West Africa today. These girls are hierodulic slaves, combining the roles of agricultural slave, domestic slave, temple slave and sex slave.

Originally offered as human sacrifice to ensure success in war, these girls are the helpless victims of a traditional form of slavery which has survived intact since the pre-colonial era. These slaves live in villages just a half-day’s journey inland from the very coast from which slaves were once shipped to the Americas.

Taken from their mothers from the age of four, these girls work from dawn to dusk in the fields. From the age of five they are beaten with canes or with specially-made wire whips. They are raped from as young as eight years old. Their masters, the voodoo priests, claim the traditional right of masters since the dawn of history to free sexual access to the slaves, and the girls are beaten into submission if they refuse.

The material in this report is based on a Mission to West Africa by the Society’s Secretary.

Photo taken by the Secretary during Mission to Africa..

THE SOCIETY IN ACTION
Since 1996, the Society, in discharging its historic role, has purchased the emancipation or manumission of over 500 of these slave girls, despite the efforts of the other masters waging a vigorous campaign against the emancipation of their slaves, either by refusing to permit their slaves to be purchased or demanding exorbitant prices for them.

THIS IS THE SOCIETY IN ACTION